The exchange rate of Euro to Renminbi fell below the 7.60 mark, showing its weakness compared with the same period last year

As the world’s top currency in circulation, the euro has a strong firmness, a wide range of circulation, and its purchasing power is also at a relatively high level, especially in the global foreign exchange reserves. Quite influential. However, as the new crown epidemic has swept the world, it has had a significant impact on the macroeconomic and social development of the Eurozone. The corresponding currency in circulation, the euro, has seen a shock and downward trend. The operation of foreign exchange interest rates has set a historical record, which is in contrast to the normal level. Of course, after the depreciation of the euro, the exchange rate for the renminbi has risen, and the number of 100,000 yuan against the euro has increased significantly, and the euro has depreciated by a large margin. 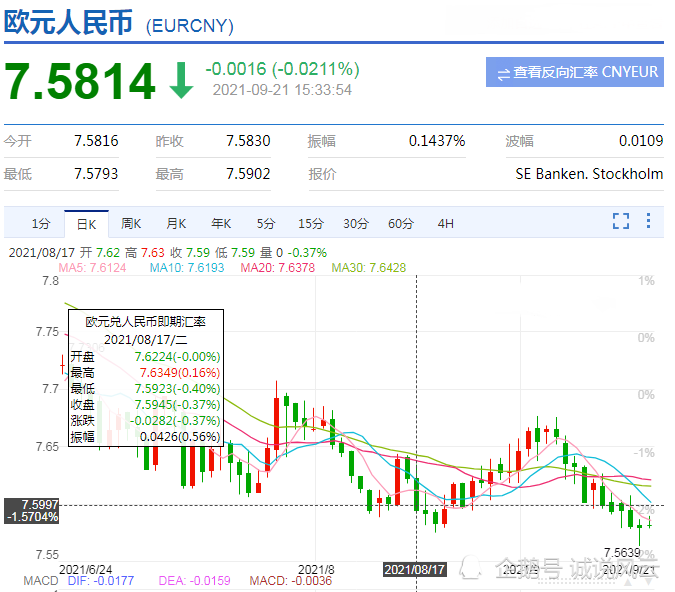 In addition, the exchange rate between the euro and the renminbi recently fell below the 7.60 mark, the euro continued to weaken overall, and the depreciation continued to expand. On the other hand, the renminbi-euro exchange rate continued to rise and mainly appreciated. The foreign exchange rate exceeded 1.30, and even the highest quoted price reached around 1.320, compared with last year. Compared with the euro’s weakness around 8.0 in the same period, the renminbi is still operating steadily. In addition, the weak rebound of the euro and the continuous downward adjustment are closely related to the slower economic recovery in the euro area, because the macro economy is not enough to support the euro’s substantial rebound, and the economic recovery of the euro area countries has different speeds, and the economy is in the process of development. There are many uncertain factors, and the problems in each country are different. In particular, the new crown epidemic is still spreading in the European Union, which poses greater challenges to the sustained economic recovery. Therefore, the weakness of the euro is difficult to change significantly in the short term.

Secondly, according to the observation of the 4-hour chart of Europe and the United States, the euro began to rebound in the previous trading day after the volatility fell. It once fell below the low of last Friday and then quickly recovered. The short-term k-line pattern appears to be falsely broken, and it is very likely to show a rebound. However, the rebound is expected to be limited. After all, there is not much good news to support the stable recovery of the euro. Of course, when the euro-renminbi exchange rate fell below 7.60, it meant that 100,000 euros could no longer be converted into 760,000 yuan, and the depreciation of the euro increased significantly, in contrast to the previous trend.

Furthermore, in the final analysis, the economic recovery of the Eurozone in the third quarter is not as good as China’s. The main economic pillars of investment, foreign trade, consumption, and service industries have recovered relatively low growth rates. This is in contrast with China’s macroeconomic operation, and the latter is significantly better than China. The former, as can be seen from the main macroeconomic indicators completed in July-August, therefore, the renminbi has basically continued to operate steadily, while the euro in the euro zone has been unable to recover. As a result, the exchange rate of the euro against the renminbi has continued to fall, and the depreciation rate has increased, setting a record this year. The record since the beginning of the year has shown a weak trend compared to the same period last year. In addition, taking today as an example, the euro against the US dollar hit a daily low of 1.1721 and fell by 0.05% within the day. This further shows that the euro is still weak and its rebound is hindered. There is less good news to support the euro’s recovery.

article links：The exchange rate of Euro to Renminbi fell below the 7.60 mark, showing its weakness compared with the same period last year